The Other Side of Paradise: Life in the New Cuba– Julia Cooke

It was fall semester of my senior year at Niagara University when I read the email that they were sponsoring a two week trip to Havana, Cuba. The email came through as I was sitting in Political Science 390, the final most important class to sew up my secondary poli sci major. I read the email, and although it sounded interesting I had already studied abroad. But more importantly this trip was leaving the day before graduation. Yeah right, I thought to myself. My parents would die if I skipped graduation for a trip to a country that hasn’t had the best reputation in the press. Quite honestly, I left it right there. In my inbox.

Until another email came through a few days later. They were adjusting the dates of the trip, to depart the Tuesday after graduation. Apparently, numerous graduating seniors were interested in the opportunity and complained that it conflicted with graduation. As soon as I read this, I was hooked. I had to go. This had to be the end of my time at Niagara.

Over the following weeks, I filled out the application, looked at finances and asked around on campus to see what others were thinking. I slowly approached the subject with my mom, as I’ve done with so many other trips beforehand. It always starts out as a exploratory thought, to kind of put it into her subconscious. Something like “Yeah, so, apparently the political science department is taking a trip to Cuba. Pretty interesting right?” Usually a few more comments like that are made tying my interest before straightforward saying that I’m doing it. I wonder how long it will take her to catch on to this.

With my dad, it’s the opposite. I straightforward tell him I’m going to Cuba. His worries are less likely to come out and he’s usually confused and brings up something silly that makes me laugh. (Like when I told him I was going to Morocco, and he thought Monaco.)

Nonetheless, over the next few months I prepared for my trip to Cuba. There was the obvious paperwork. And then the accompanying Thursday night class to go along with it. And of course, the quick turnaround from packing up my college apartment, walking at graduation, to packing the suitcase for the two week trip.

Going to Cuba was a big deal. A really big deal. Not only was I excited but so was everyone around me who found out. I was shocked at the amount of people in my life who were genuinely interested in me going to this place was so far away but in reality only 103 miles away (Cuba is closer to Florida, then Alexandria is to my hometown. I’m 3x as far.) The amount of attention I got after Europe was minuscule in comparison to Cuba. Even a local newspaper and our schools news ran the story.

Before I knew it, I was on the plane form JFK to HAV. My first impressions of Cuba was how hot and humid it was. My second impression was of José Marti International Airport. It was a small airport with one level and an orangish roof. It sort of looked like a warehouse. The inside was small. One large room with two luggage carousels. It was like no other airport I’ve been into in the world. So straightforward and simple.

Over the next two weeks, we travelled all around Havana, with a short trip to the Viñales. The skies were always bright blue with an occasional cloud. While in Havana, I sat in Plaza Vieja and people watched. Took photos by the Cathedral of the Virgin Mary of the Immaculate Conception and the Basilica of San Francisco De Asis. I stared at the all too familiar dome of El Capital. I bought churros in Market Square and shopped in the Plaza de Armas.  I walked along the Malecon and down little alley ways. I ate at La Bodeguito del Media, La Moneda Cubana Restaurant and had one too many mojitos at FAC, an art factory bar club.

Because this was a college-sponsored trip, there were specific experiences we had that a normal tourist wouldn’t be privy to. We toured a polyclinic. It was fascinating to see how many services they offered in one spot. Everything from ultrasound equipment to rehabilitation facilities and speech pathologists on site. It really is a one stop shop. About halfway through, we visited a primary school that had about 500 kids from ages 5-11. Every classroom we walked by was filled with little kids learning and smiling when they noticed their American neighbors walking through their halls. We met with the principal of the school, where we gifted her with various school supplies. She shed tears of joy for supplies that were so simple for us to bring. One of the crazies experiences was meeting with Old Havana’s disaster relief planning and management team. They brought us in to a tiny room with a couple maps on the wall and said this was the center of all of their planning efforts. They didn’t event have a computer. It was astonishing and inspiring to see how success can be had without all the bells and whistles. We also got to spend time at a nonprofit, Necesitamos de tu Sonrisa, that helped youth with disabilities adjust to life. When we arrived, the kids prepared dances and songs for us. Afterwards, I gave out a lot of little gifts I brought and they gave us these special homemade dolls. My experience at Necesitamos de tu Sonrisa was by far the most powerful and moving thing that has happened in my life.

But one of my most favorite was volunteering at  Muraleando. Muraleando was an old water tanker garbage pit turned arts center that doubled as a place that provided food, clothes, and activities for less fortunate locals. We volunteered here three or four times. Each time was a little different. One time we had lunch and listened to music. Another there was a local artist selling his work in the old hallowed out water tank. I helped paint fences and sidewalk murals. We played baseball and did art prints with local kids. I met a young dentist named Adrian here. I spent a lot of time talking with him, asking a lot of questions about his life and Cuba. He taught me so much and I’m so grateful for the friend I made. And I’m fortunate to say, I’m lucky to connect with him occasionally and hear what is going on in Havana.

The only time we left Havana, was for an overnight to the Viñales mountains, which was about 3 hours southwest of the city. Here we stopped at another local art center, where we spent time with children. I also waked around drinking from a freshly opened coconut, which truly made me feel like I was in the Caribbean. The view from our hotel was breathtaking. Luscious trees and forest galore. For me, it reminded me of a scene right out of Jurassic Park. On the way home from the Viñales, we stopped at a tobacco house and learned about the process of making cigars. It was only a one night getaway, but critical for seeing a more wholesome view of Cuba.

What struck me most about my time in Cuba was the people. The inexplicable hospitality of both host mothers I stayed with, who took me in and cooked and cleaned for me. Adrian, who volunteered his spare time at Muraleando and running a nonprofit for kids with down syndrome, who still spent so much time talking with me and answering all my questions. The elderly man who walked up to us in the street and hugged us while saying “My American brothers and sisters, I haven’t seen you in years.” I’m thankful for every person that was kind enough to talk to us along the way from our lecturers and guides to street performers to bartenders. Every single person I met was kind and willing to talk and that I’m forever thankful for.

Julia Cooke tries to capture the people of Havana in The Other Side of Paradise: Life in the New Cuba. And to some degree, she does. I just felt like individually or collectively, she doesn’t capture what I remember Cuba to be. Maybe it’s a because the book was published in 2014, two years before I was on the island and things were changing rapidly. I’m sure that has something to do with it along with her visit being much longer and in depth. But, I like think it has something to do with how the perception of every place changes with the person visiting. Cuba for me was much different than the way Cooke saw it or anyone else for that matter. That’s what makes this world, and it’s exploration, so beautiful. We’re all looking at the same things but seeing them differently.

Would I recommend this book? I think so. There are certain pillars of Cuba standing tall throughout the book, and that’s something I connected to. I’d like to read a more recent account though. Do I want to go back to Cuba? Yes. I think about it all the time. Europe taught me a lot about myself, but Cuba made me view the world in a completely different lens. A lens I’m still using today. 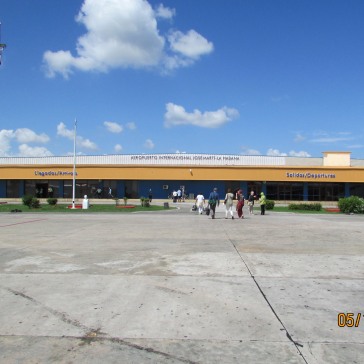 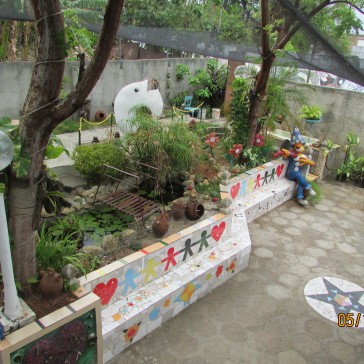 First time having a coconut

The primary school we visited 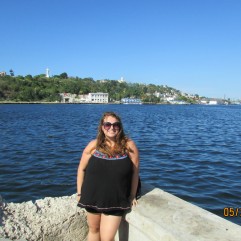 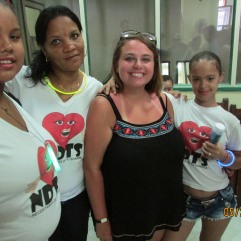 A day at the nonprofit.